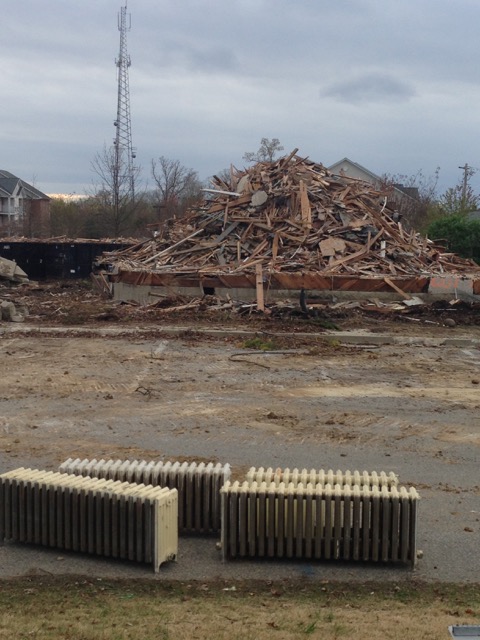 Brian Sortee, 25, of Hampton, became an overnight hero last Tuesday, when a flash tornado hit the home of his next door neighbour, 82-year-old Evelyn Smith, affectionately known to all as “Mrs. Smith.” Sortee was mowing his lawn when he spotted the tornado at a distance, coming straight for Mrs. Smith’s house.

“I could tell it was going to hit,” recalls Sortee. “It had Mrs. Smith’s name all over it.” But since Mrs. Smith was out shopping that afternoon, she was completely safe, as Mr. Sortee knew. “She always asks if I need anything at the store when she goes,” stated Sortee. But he also knew that she had valuable antique radiators in the house, since it was built over one hundred years ago. “She just loves those radiators,” quipped Smith. “She always said they were her favourite thing about the house.” Radiators have a warm reputation in these parts, even if they aren’t antique, as the winter can be quite cold. But clearly Mrs. Smith’s radiators are something special.

So as soon as he saw the tornado coming, Sortee sprang into action. He completely abandoned his lawnmower, not the least bit concerned if the tornado should tear it to shreds along with everything else in its path, and ran to Mrs. Smith’s house, only about a stone’s throw away, to save her special antique radiators.

“I couldn’t remember exactly how many there were in the house,” Sortee realised. “So I just leaped through an open window and ran from room to room, with my wrench in hand, and got every radiator I found. I guess there wasn’t one in the kitchen.” When asked if it was difficult to remove the radiators, Sortee said it wasn’t. “I work on my car a lot, so I always have a wrench handy, and I’m pretty good at taking stuff apart. Putting back together, well, that’s a different story. But I can remove parts like nobody’s business.”

And carrying the weight of all those radiators? Not everyone can do that. But Sortee said he felt a “surge of superhuman strength, like right after you watch a Superman movie.” So carrying one radiator after another down the stairs and out the door to the front lawn wasn’t all that difficult. Psychologists refer to that as “tornado adrenaline.” Which is basically what it is.

As it turned out, the tornado did indeed touch down on Mrs. Smith’s house. In fact, it seemed to go right down the chimney and suck the walls in from the inside, turning the entire thing to rubble in a matter of seconds, just as Sortee got the last radiator out and fell prone on the front lawn next to it. The tornado then lifted up again and went its merry way without harming a single other building. A few trees lost branches, but otherwise there was no real damage in its wake.

The people of Hampton are relieved at the lack of damage, but all they could talk about afterwards was Brian Sortee’s heroism. “That young man is worth a million dollars,” Mrs. Smith says. “And so are those radiators, or at least I think so.” John Green, Mrs. Smith’s other next-door neighbour, gave Sortee his most prized trophy from his bowling days as a reward. “I’m getting old anyway,” said Green. “I don’t really need the trophy anymore, and I figured he deserved something.” The town police threw Sortee a party with burgers and a cake that read “For the heroic rescue of Mrs. Smith’s radiators.” The whole town was invited, and they even sang “Happy Birthday,” despite the fact that it wasn’t Sortee’s birthday.

“I just can’t get over the thanks I’ve received,” Sortee beamed. “I love this town, I love Mrs. Smith’s radiators, and I’d do the same for all my neighbours.”

Sortee is still unmarried and may be contacted by telephone, especially on Tuesdays, which are his off days.

Have You Walked Your Lawn Mower Today?

A Tiger and a Killer Bee whose Home was a Cedar

The Tale of the Dog
← Previous Article
Next Article →

Things to Do in a Dentist's Waiting Room

Have you ever found yourself sitting in a dentist's waiting[...]

In a formal proclamation yesterday, the Medical Association of America[...]