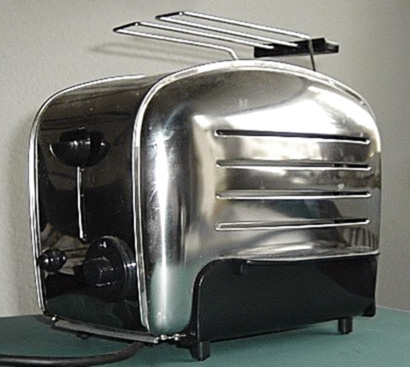 Industrial Miniscule™ is a new company with a bold mission: to provide “industrial solutions for miniscule problems.” In a 1 February press release detailing the company’s plans for market dominance, CEO Mark Kram said,

One common problem most of us face is dealing with mail. Almost every day, you get anywhere from a few to several pieces of mail, many of them in sealed envelopes. In the old days, people were content with opening these envelopes with a letter opener or even their own fingers (which may result in paper cuts). But there must be something better, some high-tech way to open these envelopes that would be at least 10% faster, and require a really fab machine.

Indeed, this is one of the first problems Industrial Miniscule has tackled. They have created a device called the Mail Derailer,1 a device that looks something like a shredding machine, with a slot at the top which accepts envelopes up to 17″ (43.8 cm) wide. As an envelope is passed through the slot, an internal blades slices through the envelope exactly 0.01″ (0.254 mm) from the edge, so that the mail is opened without damaging the contents.2

Another problem Industrial Miniscule has solved is how to butter a piece of toast. Now, the average person takes his toast out of the toaster by hand3 or by fork,4 then puts the toast onto a plate, and finally uses a butter knife to butter said toast. This is a 3-step process, which can obviously be streamlined to improve productivity at the breakfast table. Industrial Miniscule has designed a device called the Toaster Boaster5 which actually butters the bread for you, seemingly by magic.

How does it work? Well, it starts with a machine that fits over top of the standard toaster.6 The bread is put into the toaster and the Toaster Boaster placed over it while the toast is toasting. A separate compartment of the machine accepts a stick of butter. Laser sensors detect the doneness™ of the toast, and robotic arms get ready to pull the toast out with precision timing exactly when the toast pops up. Then a really fast knife-arm swiftly and speedily wipes back and forth over the bread as the butter is melted at the exact temperature at which butter melts.7 There is even a duplexer option which can butter both sides of the bread, for about twice the price of the standard Toaster Boaster. All this results in having precisely-buttered toast in about half the time.

Other forthcoming products include a laundry loader, a portable seatbelt unbuckler, a mobile phone answerer, and a chair positioner, all grossly expensive, automated devices that do menial tasks and include lots of useless but extremely impressive features.

The Flying News staff looks forward to testing each of these devices once Industrial Miniscule sends us some product samples.

Secrets of the Ancients: Why Chaucer Couldn't Spell

What thought, dear reader, flits first across the surface of[...]

You may not be looking for work today, but there's[...]

Replacing a Kitchen Faucet for the Amateur Plumber